Is It Safe to Go to Mexico?

Teresa Bitler thought about spending Easter this year lounging on the beach in Puerto Penasco, Mexico, with her husband and two daughters. Then she changed her mind.

“We heard about the drug violence down there,” says Ms. Bitler, who lives near Phoenix. She envisioned the 4?-hour drive, much of it through vast stretches of empty Mexican desert. Instead, the family is going to Disneyland this weekend.

Just a few months ago, American travel to Mexico was booming. Despite the economic downturn in the U.S., Mexico reported a 14% increase in visitors in January over the previous year, spurred by a strong U.S. dollar against the Mexican peso and a wave of American tourists who wanted to stay close to home. Eighty million Americans visited Mexico last year alone, according to the Mexico Tourism Board, making tourism a $13.2 billion industry, and Mexico’s third-highest revenue stream. 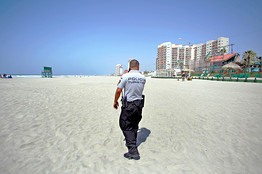 By February, news was breaking daily about growing grisly violence between warring factions of Mexico’s drug cartels. Beheadings, kidnappings and torture dominated headlines. The U.S. State Department issued a travel alert for Mexico in late February, updating one issued in October, citing “increased violence near the U.S. border” and cautioning that “dozens” of Americans have been kidnapped across Mexico in recent years. George J. Tenet, the former Central Intelligence Agency director, urged his college-age son to cancel a spring-break trip to Acapulco, based on news reports he’d read; an exaggerated email about the exchange quickly made the rounds at college campuses.

All of this has many travelers wondering: Is Mexico still safe for tourists?

Despite the travel alert, “we are not advising people not to go to Mexico,” says Heide Bronke Fulton, a State Department spokeswoman. She adds that the main areas of concern are cities and towns near the U.S. border. Travel alerts, which can caution against everything from cyclone season to terrorism threats, are far less severe than the State Department’s “warnings,” in place for countries like Iraq and Sudan, which essentially advise against traveling to a country altogether. 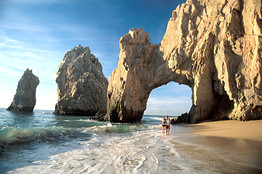 Mexico Tourism Board Cabo San Lucas, at the southern tip of Baja California.

Security experts say tourists can safely travel to Mexico — if they stay within known resort areas, avoid traveling to Mexico by road and steer clear of U.S. border areas. Mike Ackerman, president of the Ackerman Group, an investigative security firm, says most of the drug-trade crime within Mexico is “narco on narco” violence or violence against police. Kidnapping, another growing problem in Mexico, almost always targets wealthy Mexicans, not Americans or other foreigners.

To counteract rising fears about travel south of the border, Mexico’s tourism industry has gone on a public-relations offensive. Hotels are offering discounts. Resort areas have beefed up security. They’re trying to spread a key message: Mexico is a large, diverse country, and not every area has been affected by the increase in drug violence. Most of the tourist and resort areas are separated by hundreds of miles from the volatile battlegrounds of the drug war. Staying away from Puerto Vallarta because of what’s going on in Ciudad Ju?rez would be like not traveling to Nebraska because of something happening in New York City, tourism officials say.

Still, resorts as far as 1,300 miles away from the core of Mexico’s drug violence say they immediately saw a wave of cancellations after the travel alert was issued. At other hotels, new bookings simply stopped rolling in. Travel agents say they began fielding phone calls from concerned clients wanting to know if they should cancel their vacation. 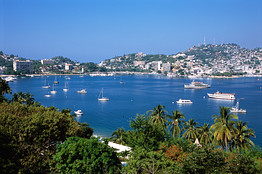 Photographer’s Choice/Getty Images The bay of Acapulco, the city that ex-CIA director George J. Tenet urged his son to avoid.

Jim Swickard, owner of the Hacienda de los Santos in Alamos, a resort town in the Sonora region, in western Mexico, says that after the U.S. issued the fall travel alert, January bookings at the luxury resort dropped by nearly 50% from a year earlier. He says that if business continues this way, he’ll have to cut his staff of 55 down to 25 by summertime.

Mr. Swickard, whose resort is nearly 400 miles from Nogales, says he has never had an incident of violence or kidnapping with a tourist staying at his resort, or driving from the U.S. en route to the resort. “We don’t have a drug war going on in Alamos,” he says.

Last month, Mexico’s Tourism Board launched a new Web site, Mexico-Update.com, which has video testimonials from travelers who have visited Mexico recently and a map meant to clarify which areas were included in the U.S. government’s travel alert. Areas with red “alert” dots include Tijuana, Ciudad Ju?rez, Nogales and Chihuahua, all cities in the northwest part of the country that are near the U.S. border.

Karisma Hotels, which has seven properties in Mexico, has seen business decline by 20% since the the travel alert. Now the company is offering upgrades for guests staying four nights or more at resorts like Azul Beach Hotel and El Dorado Royale in Riviera Maya, as well as promotions for free or discounted airfare. Pueblo Bonito Luxury Hotels & Resorts, which has four hotels in Los Cabos, is offering a fourth night free for every three nights booked, and the seventh night free for every six nights. 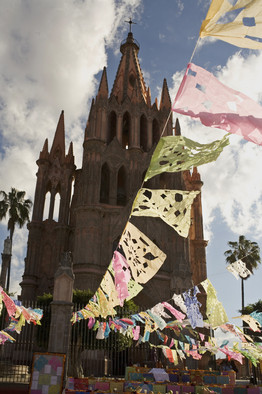 The drug trade has affected some tourist destinations. Canc?n, a city that’s also seen a real-estate boom, is smack in the middle of a major drug route to the U.S. Drug cartels, battling for control, have infiltrated the local police and killed a number of security officials, including a retired army general. As a result, the Mexican army has taken over most policing duties. But tourists have been unaffected by the gangland violence.

Many resorts and destinations have stepped up security. For the first time, visitors to the Canc?n area over spring break were met with more military checkpoints along the road from the airport to the resorts. New this year in the Los Cabos area are “tourist police,” who are dressed more casually than regular police officers and there to help visitors with directions or translations. They’re also accompanied by drug-sniffing dogs at certain times of day, says Miroslava Bautista, the area’s tourism director.

Some resorts say visibly increasing security can make tourists more nervous. Visitors “see more security and police and they feel afraid,” says Alan Duggan, the vice president of sales for Starwood Hotels, Latin America, “especially if you don’t need” the security. Resorts like the St. Regis in Punta Mita and the Westin Puerto Vallarta saw bookings drop by about 15% after the travel advisory, he says, while urban business travel hotels in areas like Mexico City didn’t see much of a drop-off, despite reports of increased crime in those areas.

Mexico tourism took a hit during spring-break season last month, when several universities advised students against going to Mexico. In February, Carol Thompson, the dean of students at the University of Arizona, in Tucson, sent an email to students with a link to the government’s travel alert and a note “strongly advis[ing] students to avoid travel to Mexico.”

Natalia Vargas, a senior at Ohio State University, had planned to travel to Puerto Vallarta this year for spring break with her roommates, booking flights and hotel rooms in January. Two weeks before they were set to hit the beach, Ms. Vargas and her friends heard from their parents that they no longer felt comfortable letting their children make the trip.

After some debate, Ms. Vargas and her friends decided to spend spring break in Florida instead.

Though the U.S. government says its records aren’t comprehensive, the leading cause of unnatural death in Mexico for an American tourist — by far — is car accident, according to State Department data. In 2008, 56 of the 81 million American citizens who visited or lived in Mexico were victims of homicide, up from 35 homicides the previous year. An estimated 6,000 people were killed in Mexico’s drug trade last year. 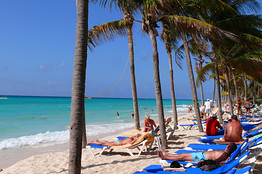 The increased violence has scared off some business travelers, as well as tourists. Steve Rudner, a lawyer who represents resorts, says since late February he’s taken on several cases against corporate groups who have canceled their meetings in Mexico and are trying to get out of having to pay, citing safety concerns.

Adam Armbruster, a broadcast-management consultant from Sarasota, Fla., agreed in January to give a keynote address at a May conference in Mexico City. Then he became nervous after reading news reports about increasing violence and kidnappings, though he’s been to Mexico City in the past. After considering hiring a personal security guard, he decided that “it wasn’t worth it,” he says, canceling and giving up his five-figure speaking fee. “I’ve got a wife and kids at home.”

Though statistically a tourist’s chances of becoming a crime victim are very slim in Mexico, those who have been say dealing with local authorities can prove frustrating. K. Jill Rigby, a travel editor from Toronto spending four months in San Miguel de Allende, a colonial-era city known as a haven for expats and artists, was mugged in February in an attack that left her on crutches for two weeks.

She doesn’t think her mugging was related to the drug trade. Instead, she cites another concern in the country: the growing gap between wealthy and poor residents in tourist areas like hers. Increasingly, young, unemployed Mexicans are returning home from the U.S. because they can no longer find work during the economic downturn. She says that reporting the crime was onerous, and that although there were several witnesses, her attackers still haven’t been apprehended by local police. District Attorney Jose Antonio Aguilera declined to comment, saying he wasn’t allowed to discuss criminal cases by telephone.

Tijuana, a border city once popular with U.S. day trippers who came to buy trinkets or drink in local bars, is one of the areas at the center of the drug trade. Several hundred people were killed there last year in drug-related violence, some of them shot on the street during the day. Visitors have been declining steadily, and more than 20% of businesses in the tourist district have closed, according to Jahdiel Vargas, the director of Tijuana’s Convention and Visitors Bureau.

Now the city is trying to win back tourists. In January, Tijuana opened a “fast lane” for visitors staying in hotels or eating in high-end restaurants to avoid long lines while crossing the border. In March, the city launched a new tourism campaign, 120 Things to Do in Tijuana, for Tijuana’s 120th anniversary. “It was pretty violent for a couple months there,” says Mr. Vargas. “But 90% of that was just focused on the mob or the drug cartels.”

Many travelers haven’t canceled their Mexico travel plans, especially those visiting established resort areas of Mexico. Stacy Small, a Brentwood, Calif.-based travel agent, recently returned from Ixtapa and Los Cabos, where she says “there wasn’t any evidence of problems.” Out of more than a dozen clients she’s booked into the area, she says, several have called to ask her about safety, but so far only one has ended up changing plans.

Last week, Mike and Ann McGibbon stayed at the Azul Sensatori Hotel in Riviera Maya, about 1,300 miles from Chihuahua, with their 10-year-old daughter. The family has traveled to the area before, and the only change in their plans this time was that they didn’t “dilly dally at the airport” in Canc?n, says Mr. McGibbon, a health-care company general manager from Libertyville, Ill. They spent their days walking along the beach, swimming and reading by the pool. “At no point did I feel unsafe,” says Mrs. McGibbon.